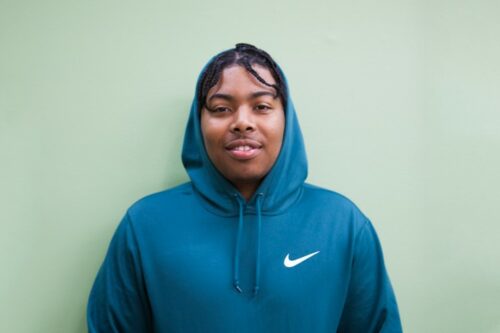 Jordan was only ten when his father died, and while he did his best to adapt to life without his father’s guidance, it wasn’t easy. “Not having my dad there forced me to be stronger, but it also made me weaker,” says Jordan. “I feel like if he were here, a lot of stuff wouldn’t have happened.”

As Jordan entered his teen years, his relationship with his mother deteriorated and he began engaging in self-destructive behaviors and entered foster care as a teenager. After more than two years of living in various group homes and at times, living with an aunt, Jordan chose to take control of his own life and build skills toward independence.

“You can’t grow up without experiencing grown up stuff,” Jordan says. First Place for Youth offered him the opportunity to gain that experience secure in the knowledge that his team at First Place was by his side.

Since joining First Place through the Foster Youth Practice Space at Art + Practice in November 2016, Jordan has been able to focus on setting and working toward his goals. While it’s only been three months since he walked through the doors of First Place’s office, Jordan has already made incredible strides toward the life he wants. He secured his first job, started his first semester at El Camino College and, with the help of his First Place Youth Advocate, re-connected with his mother after a year apart. As if that’s not enough to keep anyone busy, Jordan also has his eyes on a career in the music industry, so much of what spare time he has is spent writing and practicing in the studio.

“Having a roof over my head has really helped,” says Jordan of the role that First Place has played in his new, more stable lifestyle. “At the end of the day, I can come home and not have to worry because I have a safe place to be.”

This profile first appeared in issue #1 of the Art + Practice 2017 Newsletter. To learn more about our collaboration with A+P, visit the Foster Youth Services section of their website.

FacebookTwitterRedditLinkedInTumblrPinterestVkEmail
Previous Next
Go to Top