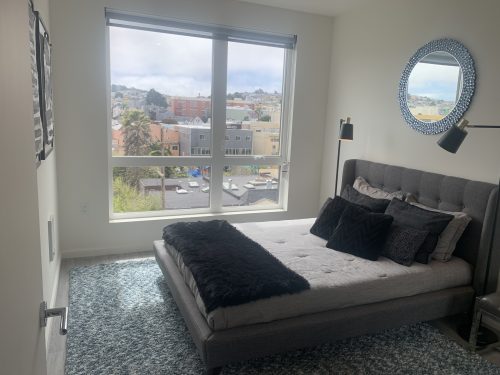 A view of San Francisco inside the bedroom.

Last week, we moved several young adults into five brand new San Francisco apartments near transit and schools in the Outer Mission/Excelsior neighborhood. After a decade in which only 11 new market-rate units were built in those neighborhoods, a new building opened last month with 63 new, below-market-rate apartments, including five designated just for young adults enrolled in our My First PlaceTM program. The building has sparkling views of the city to the north and south and was funded entirely with private dollars.

Calling the new building a “labor of love” by her San Francisco developer family, Sufi Tabazhof and her parents spoke at the building’s grand opening last month and described a ten-year odyssey to get the units approved and built.

“San Francisco has meant so much to us over the past 40 years”, she said. “We are humbled to do our part to help make the city a more inclusive place for all, as it was when my family first landed here as immigrants decades ago.” 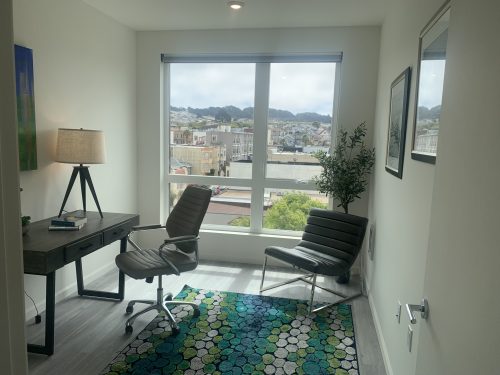 A view of San Francisco inside the office room.

It takes innovative solutions to break through the seemingly intractable problem of homelessness and it also takes persistence. One thing is certain: every single one of us was once 18 years old and learning how to become an adult. Most of us could rely on family and community for either financial or moral support, or for both. Imagine lacking such supports while trying to find a job that can pay the current average $3,387 rent for a one-bedroom San Francisco apartment.

We’re thankful for all the community support that allows us to provide a place to call home and critical skill building and case management for these young adults.

FacebookTwitterRedditLinkedInTumblrPinterestVkEmail
Previous Next
Go to Top